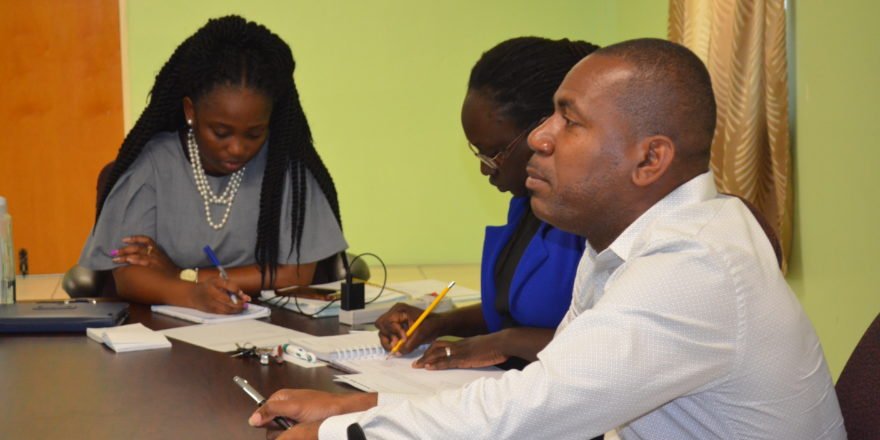 GIVE ATTENTION TO THE RELEVANT LOCAL AUTHORITIES

Committees comprising the National Disaster Plan reported their state of readiness on Thursday, May 10th, under the Chairmanship of Deputy Prime Minister, Hon Shawn Richards. In keeping with his Mitigation Council responsibilities, Minister Richards concluded that committees are well prepared this year as opposed to the same timeline last year.

“I think we are in a much better position in terms of our preparedness actions”, he said, “we improve our capacity with practice by ensuring that we plan and plan properly.”

Residents and citizens are urged to engage in preparedness activities in order to mitigate the impacts of disaster on their homes and within the communities where they reside. This call to action comprises the annual readiness campaign by NEMA, in anticipation of the upcoming Atlantic Hurricane season.

“Hazards are categorised in a number of ways”, Mrs. Claricia Langley-Stevens said, in her capacity as Deputy National Disaster Coordinator (DNDC), “and this includes seasons among other classifications, but the thing to remember in all of this is that weather is dynamic and can occur in many different forms at any given time.”

Mrs. Stevens said that persons would have witnessed seemingly unusual weather conditions during the initial stages of 2018.

“NEMA’s remit as a coordinating agency and the Disaster Management lead in the Federation,” Mrs. Stevens continued, “positions us to provide public alerts and messaging related to hazard impacts or impending disaster.”

Mrs. Stevens’ referred to an advisory issued by the local Met Office, indicating that a strong Atlantic low pressure system would generate high sea swells and very rough seas along the coastal areas in St. Kitts-Nevis, throughout the week of March 4th.

“In the dissemination of weather related information,” the Deputy Coordinator continued, “we appeal to the public to use good sense when accessing or receiving alerts from questionable sources.”

“When we are alerted by the competent authority for any hazard, we share the information in an easily identifiable way. All releases are shared on the NEMA letterhead in a format that is resistant to editing. Audio alerts and messages include a customised jingle and all presenters will be identified by our Public Relations Officer, who will also be identified, in the recording.”

“Anything less than that,” she said, “would signal that the message may not be authentic.”

The DNDC noted that the NEMA takes all Fake Alerts seriously as they have the potential to disrupt its capacity to keep communities informed and safe, and that she is taking every precaution to ensure that the correct information reaches those at risk within communities that are vulnerable to the impacts of any hazard, in the shortest time possible.

Why should this be emphasised at this time?

“The 2018 Atlantic Hurricane Season is upon us,” she said, “an above average period has been predicted for this year by scientists and researchers, and although we do not expect every system to impact our Federation, we are also reminded that it only takes one event to disable us.”

“In 2017, damages in St. Kitts-Nevis were minimal, considering the impact that neighbouring islands would have endured, however, coupled with predictions for an above-average season in 2018, we recognise that some residents have not yet recovered from last year’s impacts,” she said, “and thus will approach the season with increased vulnerabilities.”

Persons are also reminded that the Hurricane season begins June 1st and runs through the end of November. Experts predict there will be 14 named storms, seven of which may achieve hurricane status with three reaching “major hurricane strength with sustained winds of 111 miles per hour or greater.

“We expect this season will have slightly above average activity,” researchers said, anticipating increased probability for major hurricanes making landfall in the Caribbean and along the continental United States coastline during the months ahead.

“As is the case with all hurricane seasons, coastal residents particularly should know that it only takes one hurricane making landfall to make it an active season for them,” the DNDC said, imploring residents to engage in any activity now that could potentially mitigate any threat to their safety and security during an event.

“The simple fact is that you should prepare the same for every season, regardless of how much activity is predicted,” she said.

HOW TO PREPARE?
Annual Hurricane Season preparedness actions include: Ensuring that your property is cleared of debris, trash or anything that may become a missile in high winds; Do not wait until a system is approaching to purchase items you may need if you have to stay indoors for long periods. Begin to collect non-perishable food items now, keep clean containers nearby in the event that you may have to store water for drinking and cooking; Remember to collect water for bathing, washing dishes and for flushing; Secure important documents such as Passports, legal documents and Land and other Certificates in dry, waterproof packaging; Create Family Plans and share emergency numbers with everyone in your household. Each District in St. Kitts is supported by a NEMA Volunteer Management Team who are your First Responders. Get to know who represents your community by name and cell number. Find out where the shelters are in your area and make a plan to get there, should you have to move suddenly and quickly.

Residents are further urged to monitor local media for updates and alerts that are customised to the culture and surroundings here in St. Kitts-Nevis.

Senior Met Officer, Elmo Burke has noted that foreign weather alerts are seldom meant for us. Many reports do not take into account, localised and other cultural affects here in St. Kitts-Nevis.

“Alerts are generated via Antigua and Barbuda Met Office and disseminated locally from the St. Kitts Meteorological Services and NEMA. This is for a very good reason,” he said, “since we are the local competent authority with experience in how weather interacts with our geographical features, we are strategically positioned to provide information that is informed by who we are as a people including how we receive and respond to alert messaging.”

For more information on how to survive the season, visit us online at nema.kn or log onto NEMA SKN on Facebook.