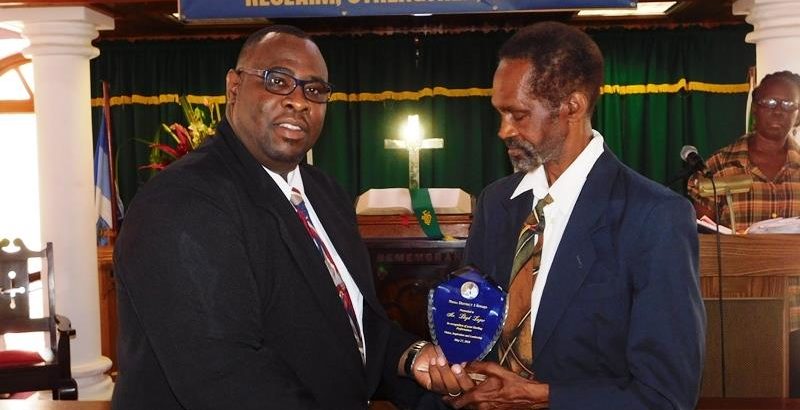 The National Emergency Management Agency (NEMA) has joined with the NEMA Volunteers of District One (covering the S.E. Peninsula to Victoria Road – East) to celebrate one of their own.

Lloyde Lazar, former Manager of District One, retired from the Unit a few years ago, following an incredibly noteworthy service to his local community, spanning more than twenty years. Mr. Lazar would have joined the NEMA Volunteers in the 90s and continued to serve District One even after he relocated outside of the locality.

His successor Rhon Boddie has led the charge as Manager of District One following his retirement and orchestrated an event to recognise contributions made by the former Leader, based upon his commitment and hard work on behalf of the Community he served.

Mr. Lazar was honoured during Service at the Methodist Church in Basseterre on May 27th , where he worships each Sunday. NEMA Districts Coordinator, Bereece Williams encouraged other Volunteers to emulate the actions of the District One Team, while representing the Agency at the gathering.

“During the ceremony,” she said, “We also took the opportunity to encourage the congregation to begin to prepare, if they have not already done so, for the very active Hurricane Season, forecasted.”

Also in attendance at the Service were other members of the District #1 Team: Hester Rawlins, Asst. Manager; Capt. Ramona Isles; Dion Richardson, Emileta Warner-Paul; Kaii Diaz and Earle Clarke; as well as Sandy Wilkin of District #5 and Lovella Berry of District #6.

“Mr. Lazar would have joined the service at a time when individuals would have had little time to serve anyone other than themselves,” she said. “He came on board and was extremely proactive in his engagements as a representative of The Agency, bearing in mind that he would have had to travel outside of the district where he resided in order to serve his Community. He is an example of what it looks like when we get disaster management right.”